A wire grid polarizer is an array of thin metal wires (lines) closely spaced, sitting on top of a transparent substrate. It works as an absorptive polarizer and only passes through light oscillating perpendicular to the wires. The polarization of electromagnetic waves describes the orientation of wave oscillations perpendicular to the direction of propagation. 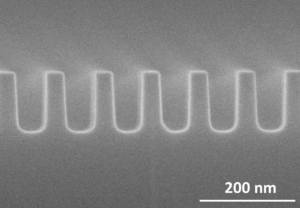 Get in touch with us

...and we'll get back to you as soon as possible.